When my husband was a baby, his mom's friend made him a "Cabbage Patch" doll. It looks like the original Cabbage Patch kids, but it's not really a Cabbage Patch Kid officially. His brother got one when he was a baby too. He wanted to do something special for his kids and carry on this tradition. We had a daughter first. She got a CPK when she was just a few months old. (In fact, it was pretty neat because it was a big sister and little sister pack, so it came with a full size CPK and a newborn CPK. So she was able to play with the little one until she got a bit older.)

Now, we've been blessed with a sweet baby boy and we've learned why my husband's mom's friend had to make the CPK. They don't make (many) boy CPK's and you definitely can't find them in the store, only online. Oh, and don't try to find one that looks like a "mixed" boy because it's not going to happen. We went all over town. Shopko, Target, even Toys R Us. Nothing. So, lamenting over the fact that I can't find this special gift for my baby boy, I post a status message about it. (Names have been hidden to protect the not-so-innocent.) 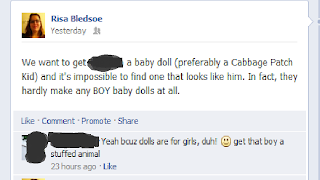 If you can't read it basically says we can't find a baby doll for the boy and the friend said, "Because dolls are for girls, duh! Get that boy a stuffed animal."

The winky face shows she was saying it jokingly, but still...

I felt a little better when a couple of my friends shared some recommendations for boy dolls. However, they are both really expensive. I found a boy CPK on the Cabbage Patch Kids website that looks like my little one, but that was after much searching. Isn't he a cutie?

It costs $49.99. That's a little pricier than most CPK, but I was willing to pay it. I went to check out and THE SHIPPING IS $18!!! Well, maybe my husband's mom still knows where that friend is and she can make baby T a doll because that's about the only way he's going to get this special gift.
Posted by Unknown at 5:57 PM