It snowed a little bit yesterday. It wasn't enough to play in, make snowballs, or make snowmen. My two year old got excited when his sister got home from school. He put on his shoes and said "Doh snow balls!" (Throw snow balls!) (He even put on his shoes by himself, though they were on the wrong feet. I was very impressed!) Well, I had to let him down and tell him that there wasn't enough snow to throw snow balls. He was still asking about it today. So, after nap and lunch time, I asked him if he wanted to make snow men. Of course, his answer was YES!!

I gathered up some crafting supplies I had around. These are the ingredients for the snowman craft!
- "Woodsies" - little wood shapes (triangles, ovals, teardrops, circles, and squares)
- Pipecleaners
- Construction Paper
- Glue
- Paint

Get creative and do whatever you want with the supplies you have! T-Rex got to pretty much do what he wanted, though I placed the mouth and arms for him. Little K needed more direction, so I pretty much did his for him and let him paint and mess with the paper. 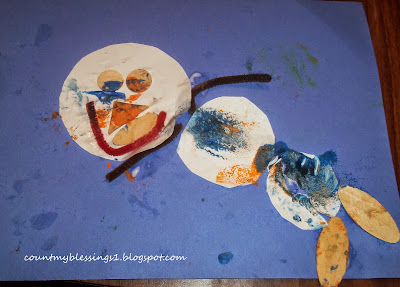 T-Rex's snowman looks like maybe he fell down. Or maybe he is dancing. I'm not sure. 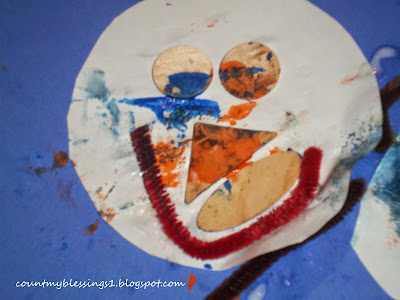 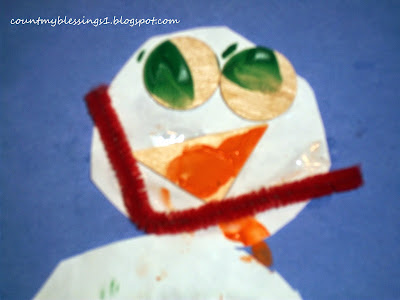 And this is Little K's snowman, mostly designed by Mom. 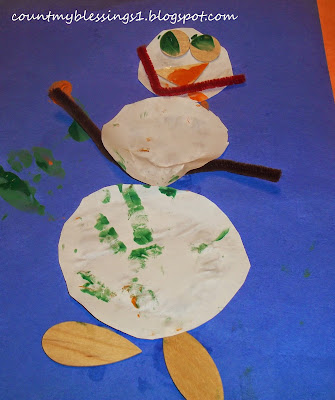