I must admit, the tagline of this book got me. As a Christian, I know that this is an especially hostile world today. The only place so far I have had courage to speak out in faith against some of the travesties occurring in the world today has been on Facebook, and I've already gotten a lot of flack for that. At least on Facebook, I never have to see, talk to, or deal with any of these people again. They are faceless to me. But as a true Christian, I should engage in the public square. I should speak out and share my faith with others. But how? 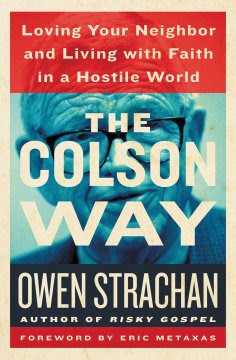 The book The Colson Way: Loving Your Neighbor and Living with Faith in a Hostile World by Owen Strachan shows us an example of a man, Chuck Colson, who lived his life in politics and the public square and share his faith without fear. Mr. Colson worked under President Nixon and was implicated in the Watergate scandal. He was a born-again Christian after a life of wrong turns and bad decisions. Owen Strachan communicates Colson's story and shares points about how Colson's example can be valid to us today.

There were a couple of things I disliked about this book. First, it was very much an autobiography. Of course, I was expecting this, but it was difficult to get through the first several chapters that were all about Mr. Colson and didn't seem to have any applications to me as a Christian. Also, although I think that other Christians can serve as a model for how we can present ourselves in this world, our ultimate model should be Christ. I don't think that any person should be glorified, but God himself should be glorified. Maybe I missed the point. I don't know. But I couldn't get past the fact that this book about this normal, everyday human being was telling me how to be a Christian today. Shouldn't I get that from Christ?

One thing that I did like is that Strachan presented quite a few "gems" about how to present ourselves as Christians in the public square and what we may go through. This is my favorite, "The church is the true culture the brings light into all the world. To do so, we must often be a counterculture. We will often be oppossed, hated, and mocked. We will be persectured in small and great ways." Strachan reminds us of this, and he also reminds us that, as Christians, "we oppose evil wherever it is found in order that we might love our neighbors and lead them unto God. In this work, we are witnesses" (p. 180-181).

As a Christian, it is truly my goal to be a witness, to be in this world, but not of it, to be an Ambassador of Christ and share his love with the world. If that means standing against what is "popular" to profess what is right according to Christ, then so be it.

So, though there were some things I didn't like about the style of the book, overall the concept was great and it did bring to light what I already know. It is difficult to live in the world as a Christian, but I always remember that first and foremost I am a citizen of God's Kingdom, not of this world.